I have a fond childhood memory of going fabric shopping with my mother at the huge, airplane hangar-sized Home Yardage store in Oakland, California. Wandering up and down the aisles, our hands stroking the bolts of fabric, my mother would murmur “look at this, Linda—this is raw silk…look at this, it’s Irish linen—what a gorgeous shade of blue” …it’s no wonder I became a fabric maker of sorts. 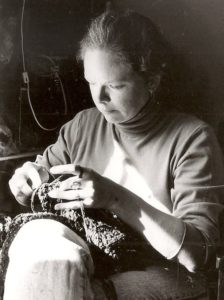 I grew up in a family of people who made things, out of necessity and for the pleasure of it: my grandfather worked in wood and in silver, grandmothers and aunts made quilts, rugs and afghans; my mother sewed exquisite clothing for my dolls on a treadle sewing machine until she got an electrified machine in the 50’s; and my father built hi-fis and radios, from scratch—I didn’t know anybody who didn’t make things. For many years my favorite game was playing dress-up, making costumes out of curtains or my mother’s old skirts. In high school I made my own clothes with oddball materials like upholstery linen and burlap, creating patterns myself when I didn’t like the commercial ones.

But going through school, I, like many, assumed I would find work in some as yet-to be determined liberal arts field—not making things, but talking about things, teaching about things, writing about things-anything but actually touching and making physical objects.

When I graduated from Cal Berkeley in 1968 with my fabulous degree in French and Comparative Literature, I still didn’t have a clue what I wanted to do, (other than read French poetry and novels). I had very clear ideas, however, about what I did not want to do: work in an office, work at something that would harm the planet and its creatures,  work at something that made me miserable. I took a few temp jobs and looked around at the world I found myself in.

It seemed important to live everyday life according to certain ideals, even down to how I took out the garbage. Someone posted a notice about starting a recycling center in Los Gatos, where I lived at the time; I plunged in, joined the recycling group, flattening cans and smashing glass jars every Saturday  for months. 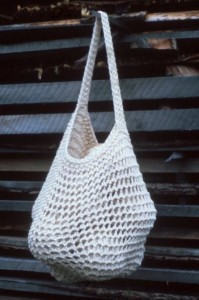 A natural next step was to make myself some crocheted shopping baskets with postal twine and baling twine so I could bring my own bags to the grocery store.  I tried out every kind of string, agricultural twine and rope I found at the hardware store and soon people started asking me if they could buy my bags. It did not take me long to realize that the process of playing with the materials and designing the baskets was the most fun I had had in a long time.

I taught myself to dye the industrial cordage with direct dyes so that I could play with color; I applied resists and produced “ikat” influenced sisal and linen and jute baskets; I began to make a few pieces of clothing in softer fibers, and  showed  my work at juried craft shows and in galleries.

Eventually my hands tired of working with stiff cordage. Fortunately, this was about the same time that I realized I wanted to focus exclusively on making clothing, so the shopping bags that started it all were retired. (I still make them for friends and use them myself).

Many years ago while writing a bio to  accompany a piece in an exhibit, I realized that I had always heard a quiet small voice  saying “I want to be an artist”, and it hit me at that moment that I had fallen ass backwards into the thing I had always, really, wanted to do: I had become a fiber artist.

I feel very lucky more than 40 years on, still to be working at something that gives me such pleasure, and to have found people who love to use and wear what I make.

I would like to thank the many friends and acquaintances over the last 35 years who have bravely agreed to model my work for photo shoots:

I would like to thank the photographers, who have made the work shine:

And finally I would like to say thank you to an extraordinary teacher and fabric lover, Holly Ihloff

made by Linda Sturgeon
↑